Europe - Netherlands - Alkmaar
Current Local Time in Alkmaar: 13:38 - There is currently daylight (Sunrise: 08:38 - Sunset: 16:26)
View over Alkmaar - Alkmaar is a city in the province of North Holland in the Netherlands. Alkmaar has a historic center with 399 national monuments and 700 city monuments. The city is known as 'the cheese city'. A traditional cheese market takes place every week from the beginning of April to the end of September. A resident of Alkmaar is called an Alkmaarder, but is popularly known as a 'cheese head'. 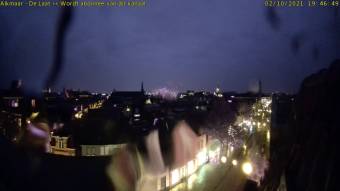 Egmond aan Zee: Webcam Zilvermeeuw, 5.4 mi.
This webcam Alkmaar with the theme City Views was added on March 5, 2021 and is operated by Webcamegmond.nl. It got 16481 visitors since then. If this camera doesn't work or should the link be wrong please report that here. You can add this webcam here to myCams.


The current weather forecast for Alkmaar in in cooperation with wetter.com: